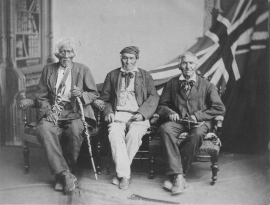 This fall, the Michael J. Colligan History Project returns to the theme of American Wars & American Life with an exciting season of events commemorating the War of 1812, America’s “Second War of Independence.” As the conflict entered its second year, some of the war’s bitterest fighting raged in Ohio between the United States, American Indians, the British and their Canadian allies. The struggle for the Great Lakes and the Ohio Valley shaped America’s westward expansion, heralding a new era in the nation’s history.

The Colligan Project is proud to host a fall line-up featuring presentations by some of the leading historians of this crucial but often neglected conflict, as well as a public symposium on “The War for the Great Lakes,” and a unique dramatic interpretation of Oliver Hazard Perry, the legendary naval commander. In addition, our popular Heritage Stories of the Miami Valley series returns, featuring Shaun Higgins interviewing renowned Hamilton historian Jim Blount. (Click below for schedule).

We look forward to seeing you all soon. In the meantime, have an excellent summer on behalf of us all!

Congratulations to Curt Ellison, director at the Michael J. Colligan History Project, for his well-deserved proclamation from Hamilton Mayor Pat Moeller, which was awarded during a recent City Council meeting.

The citation recognizes Curt’s outstanding work in coordinating the Centennial Commemoration of the Great Miami Flood of 1913; efforts culminating in more than 20 lectures, exhibits, tours, documentaries and other events attended by more than 2,000 people this spring!